In keeping with our theme of items to keep you warm this winter, this week we’d like to show off the Elizabethan nightcap.

The Elizabethan gentleman was keen to show off his wealth, status and morality through every aspect of his clothing, even in his more casual wear.  Even when staying home, he kept his head covered, often with a nightcap.  The nightcap was worn for informal wear, both day and night, but because it was a more casual head covering only few portraits show men sporting one.  Here are three, from almost a century apart:

Nightcaps were a popular item to own, and many still exist from the sixteenth century through well into the twentieth.  In the sixteenth century, they were most often made of embroidered white linen, though other fabrics were sometimes used.  The embroideries could be a single color of silk thread – most often black – or polychrome silks, and might be accented with metal threads and paillettes, and edged along the brim with lace.  The embroidery could be work by professionals or amateurs, and numerous patterns were published for this purpose.  One such book of patterns was the Trevelyon Miscellany of 1608, published by Thomas Trevelyon and containing about 20 nightcap patterns.  The patterns worked are innumerable, but the most common theme was of scrolling vines and various flowers. 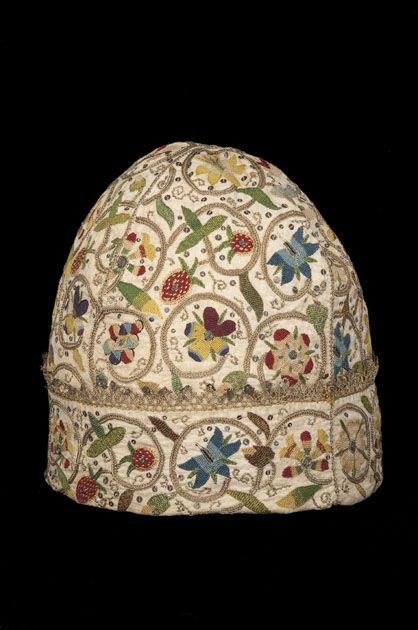 an example of the common scrolling vines and flowers, accented with paillettes and lace, from the Burrell Collection in the Glasgow Museums 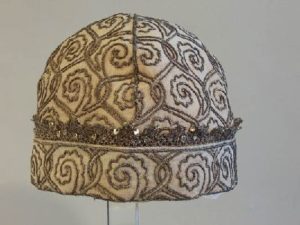 a scrolling pattern, from the Manchester Art Gallery (not currently available online as they are upgrading their online collection) 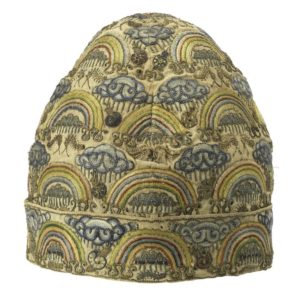 a fun design of rainbows and raining clouds, snails and caterpillars, from the Cooper-Hewitt, Smithsonian Museum 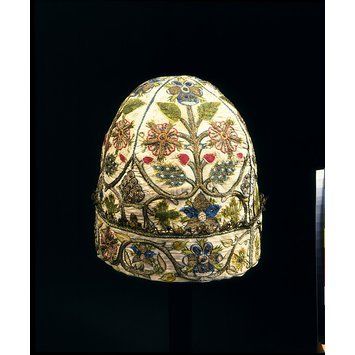 a typical example showing roses, strawberries, grapes and vines, from the Victoria and Albert Museum

a silk Italian nightcap, from the Metropolitan Museum of Art

Don’t forget to check out our Pintrest Page with more examples!