It is difficult to trace the exact date that wallpaper was introduced in England. The British National Archives notes that wallpaper was introduced to England in the mid-sixteenth century from China (source 1). However, a reproduction of an earlier wallpaper that originally hung in the Master’s Lodgings, Christ’s College, Cambridge was donated to the Victoria and Albert Museum. The original piece was printed on the back of paper with references to the first year of Henry VIII’s reign (1509), the same year the building was constructed. The original paper was also printed by Hugo Goes, a printer known to be working in York in 1509 (source 2). In the same time-frame, the Metropolitan Museum of Art holds two woodcuts for wallpaper by (no images online, but accession numbers 22.674,22.675 and 22.67.4,5).

Also, the documentary “Fabric of Britain: The Story of Wallpaper” discusses the history of wallpaper in Britain.  If you can access the video, the 16th and 17th centuries are covered between 4:29 and 6:14.

Obviously, much of the problem dating the origins of wallpaper lies in its delicate nature and predilection to quickly deteriorate. The result of this nature is a scarcity of extant wallpaper from the sixteenth century. To date, I have found images of only six extant fragments online, two of the same design. Here’s what we have to date, arranged by similarity: 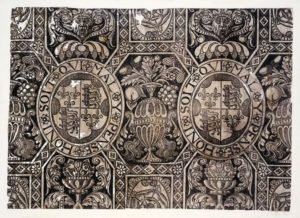 Images of Tudor roses, the Tudor coat of arms, and various fruit and foliage springing from a vase, all within ornate frames (the duplicate of this pattern is here).

Fragments of a vase of vines with, heraldic images (possible of a bird), and other unidentified motifs, all with ornate frames.

Various flowers within strap work, made to imitate blackwork embroidery.

Floral design to imitate brocade patterns popular in the 15th and 16th centuries. 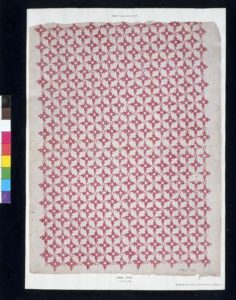 As usual, we have put together a Pintrest Board to capture these fabulous images!

And don’t forget to check out other Renaissance interior design options!