Last week, I had a request for an update on the article about the history of handkerchiefs, specifically seeking handkerchiefs with tassels.  The original article stated:

A custom began in England, which John Stow wrote about in his Annals, where girls gave small handkerchiefs with tassels as a token of their love. These handkerchiefs were often only three or four inches in diameter, and decorated with tassels at the corners, in the French fashion. Salesmen hawked these handkerchiefs in the streets of London (Braun-Ronsdorf). These handkerchiefs cost anywhere from six to sixteen pence, and the girls who bought them would often embroider them with love knots and names (Lester). Men who were given these tokens would wear them on their person, often tucked into their hatband (Braun-Ronsdorf).

At the time of the original article, there were few other examples available to view, but with the recent growth of museum collection images available online, the examples are significantly improved.  Larger and more detailed images of both original examples are now available (you can also download the image from the Victoria and Albert Museum for an even larger image).  In addition, numerous portraits can now be viewed online, of which I have found 6 showing handkerchiefs with tassels, but no further extant handkerchiefs with tassels.

Of these new examples, here are a few of my favorites: 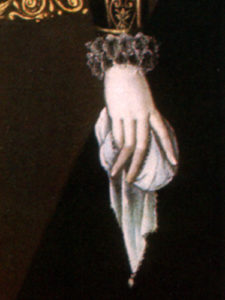 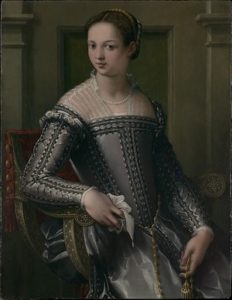 You can also check out the Pintrest page for further images!